Throughout Virginia Tech’s storied football history there has always been an emphasis on special teams and defense. This style was created by and has been kept by a man who I personally call the Father of Hokie football… Frank Beamer. Frank Beamer began his long relationship with the Hokies back in the late 1960’s (66-69) as a cornerback. After his playing days Beamer began coaching in 1972 at the University of Maryland. After Maryland, Beamer than moved on to coaching at the Citadel and Murray State from 1973 – 1986. After that Beamer returned to his true home in Blacksburg and took over as head coach and the rest they say is history…

Now 25 years later another Beamer is taking a very similar course to the one his father took so many years before him. Shane Beamer who played for the Hokies back in the late 1990’s as a long snapper. Shane like his father has had major success in the coaching department since his days of playing at Lane Stadium. Shane also has an amazing resume as a coaching assistant and more importantly as a recruiter. Beamer has spent the last 4 years as an assistant to Steve Spurrier at South Carolina and gotten recruits like top RB Marcus Lattimore and played a major role in the Gamecocks recent signing of the number 1 overall recruit Jadeveon Clowney. Look for Shane to dramatically impact the Hokies both on the field and on the recruiting trail in years to come.

The Hokies who finished with another 10 win season (11-3) for the 7th straight season will have a much easier schedule in 2011. Instead of facing a powerful non-conference opponent (like Boise ) to kick off the season, Tech will welcome Appalachian State into Lane stadium. Although this may look like an easy win for the Hokies, considering the JMU diasaster last season anything is possible. Next the Hokies will continue through their weak non-conference schedule that includes trips to ECU and Marshall. And a visit from Arkansas State.

Continuing on through the 2011 schedule the Hokies will begin ACC play with 2 of the stronger teams in the conference. It all begins with Clemson on Saturday, 10/1/11 in Lane Stadium. Tech has dominated Clemson in the past 3 meetings by a score of 147 – 50 and with the game being played in Blacksburg I really like Tech’s chances of continuing this streak. The second game of the season is an early matchup with the Miami Hurricanes who are looking to avenge the embarrassing losses in their last two games against the Hokies. After the two nail bitters to kick off conference play there are 3 games that appear to be easy wins: @ Wake , BC and @ Duke. If the Hokies were to lose 1 of these 3 games there would be a catastrophe by injuries or rookie mistakes by 1st year starting QB Logan Thomas. 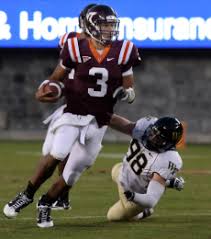 The Hokies end the season the exact way they would like to with back to back Thursday night primetime games and the annual battle for the Commonwealth Cup. The thursday night matchups feature the Hokies 1st traveling to Atlanta, GA to take on Georgia Tech who has been a major problem in recent years, and a home game in rocking Lane Stadium against the Tarheels of UNC. I think Tech will get their money’s worth down in Atlanta but will have control against UNC at home. Then to finally end the season is the annual battle (or Beatdown) for the Commonwealth Cup vs UVA .The trophy has been in the possession of Va. Tech for over 6 years now and I don’t see it leaving Blacksburg anytime soon .