It has finally happened…. Brooklyn native and NBA superstar, Carmelo Anthony has completed his cycle in professional basketball. When Anthony was 8 years old he moved to inner city Baltimore where he set all kinds of records at his 1st of 2 high schools, Towson Catholic. At Towson he averaged 14 points , 5 rebounds , 4 assists and 2 steals a game in his SOPHOMORE year. He ended his career at Towson after his junior year when he nearly doubled his stats in the scoring and rebounding  categories (23 pts and 10.3 rbs ) he was also named the Baltimore County player of the year, All Metropolitan player of the year , and  Baltimore Catholic League player of the year. Because of all the publicity Melo began hearing calls for him to skip college and go straight to the pros. Despite the talks of Melo going in to the NBA early he stayed in school and finished up his senior year at Oak Hill Academy in Virginia. Anthony attracted even more attention from the pro scouts averaging over 25 pts a game and leading his local AAU team to a tournament in Las Vegas where he played against fellow Knick Amar’e Stoudemire .

Following his year in High School Carmelo decided to attend Syracuse University where he won the greatest award possible in college… a NCAA Tournament Championship in 2003 and claiming MVP honors. In college Melo had 22.1 ppg and 10.1 boards and showed everyone what he could do on the next level. Because of this Anthony declared himself eligible for the 2003 NBA draft after just one season with the Orange. In the draft Carmelo Anthony was selected 3rd overall by the Denver Nuggets behind LeBron James (Cavs) and Darko Milicic (Pistons). 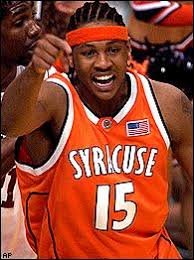 Just like in High School and College Anthony wasted no time establishing himself as a Superstar. Melo averaged 21 ppg and received all rookie 1st team honors in is 1st full year. After that Melo became an immediate big name, franchise changing kind of guy.  Averaging over 20 ppg in each of his 7 season and has made the playoffs every year aswell. But not only has Carmelo been all about show and that kind of thing, he has also been a major voice in the club house and had a desire and some valuable experience of winning, which is something that has been desperately needed in the Empire State for years.

Now with this trade that sends Carmelo ,(Point Guard) Chauncey Billups ,(Forward) Sheldon Williams , (Guard)Anthony Carter and (Forward)Renaldo Balkman to the Knicks from the Nuggets. In return the Knicks are sending a massive group of guys including 3 of their 5 starters. Headlined by (Point Guard) Raymond Felton, (Small Forwards) Wilson Chandler and Danilo Gallianari and (Center) Timofey Mozgov. There is also a third-party…. the Minnesota Timberwolves who are acquiring big men Anthony Randolph and Eddy Curry from the Knicks in exchange (Guard) Corey Brewer who will contribute a lot off of the bench for the Knicks. The Nuggets will attempt to replace the pieces that they are giving up with the 3 draft picks that they are receiving in this deal from the Knicks and the T-Wolves (2014 1st round , 2012 2nd round and 2013 2nd round pick). 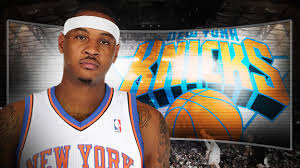 Honestly as a Knicks fan I love this move because you get two key pieces (Anthony and Billups) who along with Stoudemire and Landry Fields can compete against the Celtics,Heat and Bulls for the Eastern Conference. However for the 1st week or so it wouldn’t surprise me to see something similar to what happened earlier this year in Miami with LeBron, D-wade and Chris Bosh. Miami started out the year with almost no chemistry but look at them now… They are practically unbeatable.  But not only was this trade done for winning now but also down the road with the monster free agent class in 2012 that includes superstars like (Guards) Chris Paul, Deron Williams and (Center) Dwight Howard who could maybe end up here in NY to complement Fields,Anthony and Stoudemire and form arguable the best team in the NBA. I can see the Knicks bringing NY back to the Basketball capital of the world that it once was. Especially with St.Johns being ranked in the top 25 for the 1st time since 2002 and making a push for a long tournament run. 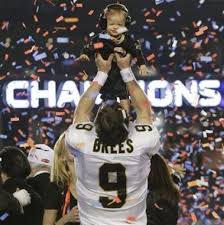 The Year of The Underdog

How will you remember 2010??? Will you think of the Tiger Woods situation , The world cup perhaps or maybe even Brett Favre and the end of his long and historic career. For me the way I’ll always remember 2010 is by the underdogs. We had 2 major sleepers win the 2 biggest titles in American Sports. Back in February the New Orleans Saints who had endured 42 losing seasons in franchise history took on the almighty Peyton Manning and the Indianapolis Colts . The Saints pulled off the unthinkable upset and won the super bowl with maybe the gutsiest call in any super bowl… The inside kick to start the 3rd Quarter of play. The other major upset in sports this season was in the MLB. Even before the season began people started picking teams to win the fall classic. I was one how picked the Yankees. But I knew no on who was taking a team from the National league Western division , especially the San Fransisco Giants. But like the Saints the Giants found their way threw tight games and incredible pitching performances by young stars like Tim Lincecum and Matt Cain.

Some other top moments of 2010 were the USA’s run in the world cup, The UCONN women’s basketball team winning 90 Straight games passing legendary UCLA and Jimmie Johnson winning his 5th straight Sprint Cup in NASCAR. This year was also a big year of deaths to famous people who impacted sports in major ways. Heres a list of some of the great people the world of sports lost in 2010:

(All of these individuals contributed so much to their respected sports and will be missed by everyone who follows the games that they have impacted so very much.)

Another big part of 2010 was controversy. With scandals like Reggie Bush at USC and the recruitment of Auburn QB Cam Newton many writers had a field day writing and saying things about these amazing athletes but at the same time mysterious people. Another big topic of 2010 was the Concussion Discussion in the NFL. With new rules put in place against big hits many people are questioning the toughness of the NFL but there are some who say that this needed (Those people don’t even watch football). My view on the topic is that you just shut up and play football. Think of back in the day when players had a little or sometimes no facemask. They were still knocking each other out and no we have tons of protection but we have become babies and want to take away the best part of football… CONTACT !! Overall I enjoyed the 2010 sprts season. Even though neither one of my 2 favorite teams (Yankees and Va Tech) had a chance to compete for a championship they still both had good season and the Hokies can still add to their glorious streak of 11 win in a row with a win against Stanford on Monday 1/3/11 on ESPN.

Heres a look back into all the championship winners in the world of sports for the year 2010:

Remember back on May 15th 2010 in my post “Let the James Begin”? Well if you take a quick little glance back there Haven Heads then you’ll see that I was right and predicted the King’s move to South Beach and a unity with DeWayne Wade and with the unexpected Chris Bosh playing in the low post. What this move does is it makes for a major shift in the power of the Eastern Conference and the NBA Universe in general. With LeBron James , DeWayne Wade and Chris Bosh together we may all be able to witness a team like the Boston Celtics or the Lakers of the 70’s and 80’s who were built by stars and competed for the title almost every year. I mean what this means is a potential sports dynasty that the city of Miami hasn’t seen since the goons from “The U” once tore it up on the gridiron. But this group of all-stars will likely stay above the law and not be belittled for their action both on and off the court. But now let’s get back on topic shall we….. now lets look at the numbers… Bosh,James and Wade were all selected in the top 10 of what I would say is or was the greatest draft class in any american professional sport. All 3 are also ranked in the top 10 by many experts and analysts for scoring,passing and most importantly their abilities to play a little defense. The one question that remains however is who will be the go to guy. I honestly don’t have Bosh in the equation of the go to guy compared to Wade and James. But in Toronto I’ll give it to him for being the franchise’s leading scorer and rebounder all-time!

Now for the down side….The city that has never won and probably will never win Cleveland,Ohio. The site of King James before his extended vacation in South Beach. I honestly as a sports fan feel for Cleveland cause they loss everything from games to teams to even icons like LeBron James. Sure they make great movies like one of my favorites “Major League” but overall I just get sad thinking about always lossing and going through things repeditly. But anyway Cleveland isn’t the topic of this post the focus is on Miami where we may see the team of 2010’s. My Final word today is the Christmas day game this year will be a good one! The Lakers led by Kobe and Gasol will face off against the Heat Wave of Dwade, LeBron and Bosh which will give guys like me a whole lot to write about !!

There are a select few people in  the world who can make millions upon millions of dollars in their 1st few years out of High School. LeBron James, the face of the Association right now is one of those select few. LBJ is currently pocketing around $15 Million and will probably have close to 25 to 27 Mill from wherever he decides to go. This sweepstakes is incomparable to any other free agent biding war in the history of competitive sports and it should be. LeBron clearly has the biggest impact on any franchise in the NBA which is why the Cavs are trying so hard to keep him. The value of that “Nothing” franchise has gone up by at least 35% since they made the home-grown phenom their 1st overall selection back in the 2003 NBA Draft. There are as of right now not counting Cleveland 5 major bidders in this so important auction. Bidders include: Bulls(Chicago), Clippers (L A), Knicks (NYC), Nets (Jersey/ Brooklyn) and Heat (Miami). There are positive and negative aspects to all of these big market clubs. Here’s my ranking of the “Akron Hammer”‘s options from 1st to worst.

So there it is we’ll see what happens